President-elect Joe Biden and the EU: Waves on both sides of the Atlantic are now blue 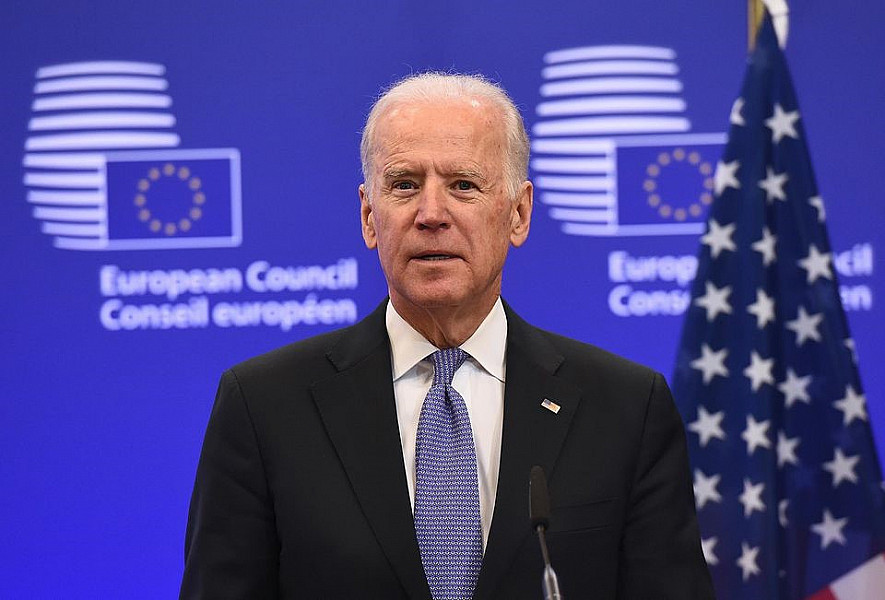 "Health, climate change, digital, reform of the multilateral rules-based system - Europe takes the initiative and offers a new positive agenda with the US. We should provide a joint leadership and address today’s global challenges,” believes the European Commission President, Ursula Von Der Leyen.

In the 2020 Presidential elections of the United States, a majority of the American people voted for the Democratic candidate Joe Biden. Such results no longer put into question the international liberal order and it can be seen as a contributing factor to the normalization of the largely rules-based international system.

On the other side of the Atlantic, the Europeans, first and foremost, see the victory of the Democratic nominee in the US presidential elections as a victory of common western values which are fundamental in American-European relations. And We should add to the latter a coinciding of political ideology: Europeans and Americans have historically conducted more bilateral or multilateral agreements during the terms of Democratic Presidents rather than those of Republican Presidents.

Biden’s victory, in part, means the consolidation of European unity as the European populist movements have lost a kind of ally in the form of Donald Trump. Trump’s defeat ideologically refers to the natural weakening of all nationalist-populist sentiments, which have become more and more wide spread during the latter period across the European continent, especially in Hungary and Poland. In order to emphasize the supremacy of Western values and generally democratic principles, Democratic Joe Biden will even convene a Global Democratic Summit during the first year of his presidential mandate. The European Union, first and foremost, would be a natural ally, united in diversity, and among others serve as a counterweight to face such political regimes as those of the Russian Federation or the People’s Republic of China.

Support from Biden of the rules-based international system should also contribute to the end of the “Brexit” process in favor of the European Union, especially in trade and economics. For example, it is unlikely that a free trade agreement will enter into force in the nearest future between the United States and the United Kingdom if the latter breaches the Northern Ireland Peace Agreement – the Good Friday Agreement – during the process of leaving the EU (the Good Friday Agreement of 1998 ended 30-years of armed conflict and built the foundation of a cooperation with open borders between Northern Ireland and Ireland). Joe Biden clearly made a statement during his pre-election campaign on the necessity of respecting this Agreement by the UK during the “Brexit” process and he stressed the importance of keeping open borders between Northern Ireland and Ireland in order to ensure the peace.

In addition, it is noteworthy that Biden, as a firm supporter of the European idea, will be more focused on the EU member states across the Continent and on improving relations with the European Union, which puts the UK in a less useful position. Consequently, to widely promote British interests and to seek allies around the world in a post-Brexit period, the combination of the above-mentioned factors gives to the United Kingdom more responsibility to respect the relevant agreements and commitments in the process of leaving the EU.

Beyond strengthening western values at the global level, the victory of Joe Biden in the US presidential elections also means the normalization of multilateral relations. As a result of the so-called isolationist foreign policy of Trump, the United States left numerous important international agreements or institutions, which made transatlantic relations more brutal. During the presidential mandate of Joe Biden, we should again consider the US as a leading actor of multilateral cooperation. “When I am speaking to foreign leaders, I am telling them: America is going to be back. We are going to be back in the game,” states President-Elect Joe Biden.

We should expect that American-European relations will become more constructive at the international level, for example, in facing such global challenges as the new coronavirus pandemic.  Joe Biden believes that the only effective way to face COVID-19 is global cooperation and coordination and plans to bring the US back into the World Health Organization in the nearest future. Indeed, to totally defeat the pandemic, the united action of the European Union and the United States is vital for today’s world.

In the context of global challenges, Joe Biden considers climate change to be “an existential threat to humanity”. The President-elect intends to pay very special attention to the issue and among other things, he plans to bring the US back into the Paris Agreement on Climate Change in the near future. The transatlantic unity against Global warming, which makes increasingly inevitable to ecologize all aspects of our socio-political life and is gaining more importance today than ever before, has a crucial importance.

During the presidential mandate of Joe Biden, transatlantic relations should be closer within the North Atlantic Treaty Organization (NATO). Despite having debates on the common European defense in the recent period, whether the EU to being less dependent on American defense and to taking it responsibility for ensuring the security of the continent, this remains, so far, just the subject of discussion. Taking into account the threats from the Russian Federation, especially in Eastern European countries, on the one hand, and on the other hand, divergent viewpoints among European leaders on a common geopolitical vision of the European Union, the idea of EU defense and security fails to reach a broad consensus. Therefore, today, the North Atlantic Treaty Organization remains again the main pillar to the security of the European peoples and the US is considered as the main ally. Furthermore, transatlantic relations are seen as irreplaceable, for example, by the Federal Republic of Germany, the leading country within the EU. “Our trans-Atlantic friendship is indispensable if we are to deal with the major challenges of our time,” said German Chancellor Angela Merkel in a statement released on the occasion of Joe Biden’s victory in the US presidential elections.

Yes, the EU-US strategic alliance is irreplaceable in the frame of transatlantic relations, but in parallel to the 21st century’s challenges, NATO’s mission itself is changing more and more, and consequently, the involvement of the EU and US in modernizing the Organization. Today, we see that the unity of the EU-US is becoming increasingly entrenched within NATO fighting against the global challenges of terrorism and hybrid threats. At the same time, to note that Joe Biden’s victory in the US presidential elections would be a contributing factor to take into account more seriously in assessing the importance of threats related to the Russian Federation, and otherwise, on which was based the foundation of the Organization. The President-elect Joe Biden considers NATO as the most effective political-military alliance in modern history and states: “To counter Russian aggression, we must keep the alliance’s military capabilities sharp […] We must impose real costs on Russia for its violations of international norms and stand with Russian civil society, which has bravely stood up time and again against President Vladimir Putin’s kleptocratic authoritarian system.”

However, beyond the aforementioned, it should also be noted that today the Russian Federation is considered as a secondary issue for the United States at the international level. The number one problem for the US is fighting against China’s hegemony in the world and conducting a truly competitive relationship. Taking into consideration American national interests, the American-Chinese rivalry will remain unchanged during Joe Biden’s presidential mandate. Due to the nature of the existing concurrence between the United States and the People’s Republic of China, the European Union seems to be as a kind of ally for the US, especially with its sharing of common western values, facing China on a number of issues – though the EU has a complex attitude as regards China.

“We (Europeans) see China as a partner, competitor and systemic rival at the same time,” mentioned the German and French Foreign Ministers in a joint open letter to address Joe Biden regarding the future of transatlantic relations. Such an attitude of the EU towards China is first and foremost driven by European interests – to further develop the Single European Market and Digital Technologies at the European level which makes it as a kind of competitor for both China as well as the US. Moreover, the development of digital and communication technologies within the EU has a political implication for European Sovereignty and above all, it is seen as a guarantor of European internal security.

To sum up, given Biden’s pre-election campaign, we should primarily expect the normalization of relations between the United States and the European Union. Radical changes in their relations are unlikely, as the current polarization of the US population and the gaining of hearts of more than 74 million Trump’s supporters will largely be a major issue on the new US President’s agenda. It is true that Democratic candidate Joe Biden defeated Trump in the US presidential elections, but he did not defeat Trumpism. Trump’s socio-political vision was supported by 10 million more American voters in the 2020 US presidential elections compared to the previous 2016 elections.

Beyond the sharp polarization within American society, the question of the support of Biden’s policies at the legislative level is also noteworthy. The results of the 2nd round scheduled for January 5th, 2021 in the US state of Georgia will determine whether Joe Biden has a majority in the Senate. In the case of the absence of a majority in the upper house, it is unclear how quickly Biden will be able to implement his policies at national and international levels.

As a whole, the prospect of a closer development of relations between the US and the EU, especially in the process of strengthening common western values or developing multilateralism, should be considered only as a contributing factor to Georgia’s foreign policy and further develop its national interests regarding Georgia’s full European (EU) and Euro-Atlantic (NATO) integration.

And now, when waves on both sides of the Atlantic are still blue and American-European unity is stronger in facing global challenges, for example, in fighting against climate changes or hybrid threats, Georgia is provided with a new opportunity to develop, with the engagement of its strategic American and European partners, a green public policy or a policy on digital transformation especially in the defense and security fields. This will not only modernize the Georgian State, but will enable it to better cope with the numerous challenges of our upcoming decades.

Human Rights for Everyone and Everywhere

Author:
9 Dec 2020
December 10, 2020, International Human Rights Day. This is its 72nd anniversary and global society still agrees to create a world in which “human beings shall enjoy freedom of speech and belief and freedom from fear”, as noted in the Universal Declaration of Human Right...
Read more

Author:
5 Aug 2020
The new coronavirus pandemic is unprecedented not only quantitatively, by the scale of its geographical distribution, but also qualitatively: its impact on our world is multidimensional, encompassing public health, humanitarian, economic and geopolitical spheres. Its un...
Read more

Gender quotas: the worst mechanism for increasing women’s political participation except for all the others

Author:
16 July 2020
A few days ago, Georgia’s parliament approved a package of amendments to the Electoral Code, including mandatory gender quotas, whose goal is to gradually increase the number of female MPs. The relevant amendment states that political parties must nominate at least one...
Read more