“Piercing the Mind” – an Account of Winning Hearts & Minds 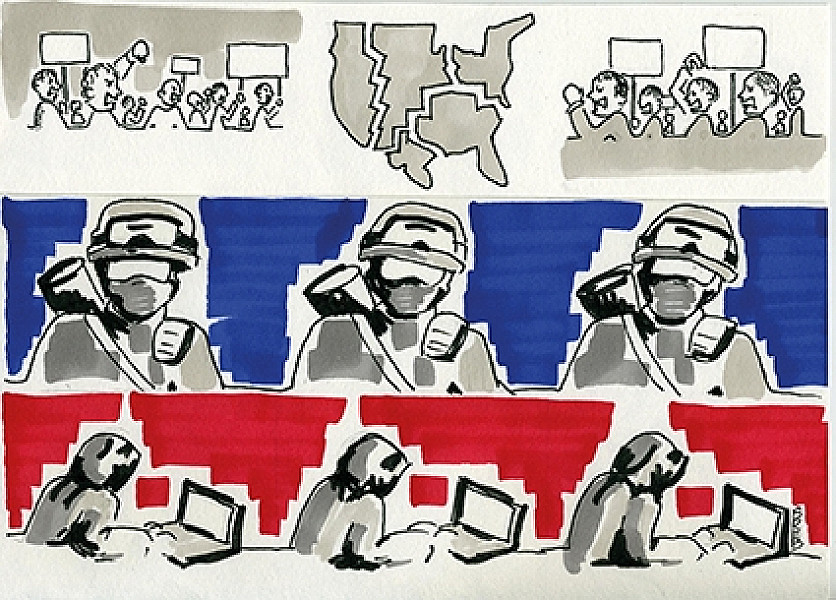 The very nature of contemporary warfare is undergoing rapid change. Major, decisive battles will no longer be limited to the physical clash of metal, to conquering swathes of territories or to physical destruction. Instead, warfare will increasingly be focused upon winning minds (i.e. brainwashing), changing (eroding) mindsets and navigating (controlling) human awareness. But, like any conflict, this new kind of warfare has its own “hardware”: information.

Information warfare is of course nothing new. Practically speaking, it appeared following the inception of organized forms of human activity and the establishment of the very first polities and states. And yet, based as it is upon trickery, deceit and prejudice—basic and primordial features of mankind that have been the “engines” of bilateral and international interaction for thousands of years—this clash of minds has been greatly affected by the advance of machines and technologies. Radical advances have resulted in highly sophisticated, nearly undetectable and latent means of sabotaging human minds and apprehensions, offering belligerent states a truly unique opportunity to attain their geopolitical goals without crossing geographical boundaries or indeed even have to leave the safety of their bases. Consequently, the more we know about this very powerful component of hybrid war and recognize its influence over our daily lives and activities, the higher our alert threshold will be and the less vulnerable our political and social unity. But beyond simply being aware of the threat, we must also seek to comprehend it. As Albert Einstein once said, “any fool can know: the point is to understand.”

Once Upon A Time: A “Spiritual Offensiveness”?

As human beings, we all (hopefully with some exceptions) tend to love influencing others. This tendency can also be observed among a range of different actors, be they “hybrid” organizations (e.g. think tanks, NGOs, academic research centers, advocacy or campaign groups) or democratic or authoritarian regimes. The penchant for psychological warfare as a sub-category of informational dominance or subversion gave birth during the Cold War to a modern interpretation of such efforts that was subsequently maintained throughout the confrontation between the Allied (Anglo-American) and Soviet (Russian) spheres of influence. Already in the mid-1950s, William Yandell Elliott, one of the main influences of American post-WW2 policy, began to campaign in favor of “peacetime psychological warfare” as an alternative to military intervention. This concept of a “psy-war” gained renewed traction in the work of Henry Kissinger, who saw it as a means of seeing through the “veil of stated grievances [in order to discern] the essence of a people’s state of mind”. He insisted upon psychological warfare being accepted as “the most important component of our foreign policy”, and maintained
that the “predominant aspect” of America’s new diplomacy in the Cold War era had to be a “psychological dimension”—some kind of “Spiritual Offensiveness”, if you will.
This historical precursor is important, as it serves as a reminder that under Truman, Eisenhower and Kennedy it was the academic-intellectual complex that ruled, and that it was a cluster of intellectuals during the 50s and 60s who came to define the trajectory of American foreign policy. It also shows that the actual birthplaces of what is nowadays known as “asymmetric” warfare were located on both sides of the “Atlantic aisle”.

The Beginning in the Past: Weaponizing History

Realizing geopolitical goals thanks to the very subtle tool of informational subjugation is possibly the most immoral and decayed form of asymmetric warfare, notably as it implies rewriting history to the advantage of political and geostrategic whims and caprices. The practice is particularly indiscreet and aggressive when it is employed by revisionist states, by states that cannot bear to come to terms with their own ugly past and seek instead to flee it or to falsely see themselves as victims. This futile and disgraceful exercise is commonly referred to by noble expressions such as “re-thinking” or “re-working” history, but all such attempts are essentially no more than the fetishization of a given political agenda for domestic consumption.

Like any information campaign or advocacy, Russia’s information warfare is based upon an inner (and indeed quasi-congenital) strategic narrative: the “State” (Государство, gosudarstvo) is the key determinant of national self-organization and international projection. Beyond leading to domestic and foreign affairs being conducted in an overly conscious manner, this very basic concept gives rise to a very standalone and definitive type of normative civilization. Unsurprisingly, it also has a major impact on Russian strategic narrative concerning informational asymmetrical (hybrid) warfare. Typical of Russia’s insurmountable challenge of “getting on terms with the past” is the signature mark of telling the past by promoting historical glory while simultaneously focusing on a shared future and restricting the rights of other international actors to accept history as it is.

In a very mundane way, this works through a synergy of classic techniques such as tradition, the political application of history and the weaponization of legal tools. Very briefly, allusions to traditions, e.g. to tsarist Russia, help to solidify and legitimize the current incumbents (notably enough, the Russian State and Church have identical interpretations of history), whilst the political application of historical developments tries to circumvent the rules-based world order and to achieve territorial expansion (e.g. Crimea, Abkhazia, South Ossetia). Moreover, an unconstrained willingness to politicize and weaponize history is matched by a similar disregard for the law (e.g. passportization in occupied regions of Georgia and Ukraine) and a quick readiness to impose a historical interpretation in order to validate upended political realities.

On the whole, in addition to her two historic allies (the army and navy according to Alexander III), Russia’s aggressive revisionism nowadays wields a weaponized history in the form of toolkits for hybrid informational warfare. Ultimately, however, this blatant disregard for the truth eventually results in a “historical ghettoization” and a Catch 22 situation in governance. But realigning history (by glorifying or victimizing it) with geopolitical or political exigencies is of course not solely a Russian or communist phenomenon.

The Innate Vulnerability of Real Democracy?

Democracy is struggling. Democracy is faltering. Democracy is failing to deliver what it used to ensure: a sense of security, a sufficient degree of equality and inclusivity, of social fairness and solidarity, of reliability when it comes to public services. These flaws are (hopefully) temporary and the result of fundamental changes to the political and social fabric of our post-modern society, but the precise nature of these changes lies beyond the scope of this article. These temporary flaws and shortcomings increase the exposure of democracy to the malign influence of information warfare and its vulnerability to destructive forces. Defending democracy from these clearly labelled forces is one of the greatest challenges we face, but the challenge becomes even greater when what we seek to counter has no label attached. As a result, we are all—the core Western democracies and those on its periphery such as Georgia—engaged in a new kind of fight whose maverick nature we have never witnessed before on such a large scale. Furthermore, it is discouraging to witness how our Western rules-based order is cracking under the pressure of centrifugal national and populist movements and as a result of the emergence of a “don’t know, don’t care” generation of young people. Regardless: these harmful cleavages must be dealt with effectively and these harmful processes need to be stopped and reversed.

The task of successfully locating and countering abuses of information for anti-social, anti-liberal and anti-democratic ends requires concerted efforts among many different actors at many different levels, from the grass roots to the decision-makers themselves. In the former case, it is critical that voters become capable of making “informed decisions”, especially when the authorities are unable to identify predators or avoid naming them for political reasons. It is equally important that businesses be held accountable when deciding to invest themselves in certain initiatives or projects. (The media certainly play a special role in this regard when seeking to ensure as much transparency as possible, including through investigative journalism). Unmasking and exposing fraudulent “experts” and various other intellectual crooks would also do much to protect the minds of voters.

Clearly, a great share of responsibility falls upon the shoulders of the authorities, whose primary mission, besides addressing the challenge of information warfare at a regulatory level (e.g. by clarifying definitions, countering harmful online campaigns, punishing those who depend on dubious and opaque business and financial channels, etc.), is to persuade people of the rightness of their vision and to offer convincing alternatives to a predator’s arguments. Strengthening regional resilience and ensuring the greater integration of Western defensive and counter-offensive systems must also be made a constant priority.

Yet understandably, even if all necessary measures are well thought out and orchestrated, it still remains a monumental task for small nations such as Georgia to confront the growing menace of hybrid warfare and disinformation. That said, even merely deterring (as opposed to completely countering) an aggressor by raising the cost of his interventions and lowering the value of his possible gains would hopefully contribute to strengthening our own values-based offensive to the best of our abilities. We have certainly been engaged in this new kind of stand-off for some time already, and it should never be forgotten that the ultimate goal of our efforts to garner as much domestic and international support as possible is not merely to preserve our infrastructure and society, but to shelter our identity and our right to freedom.