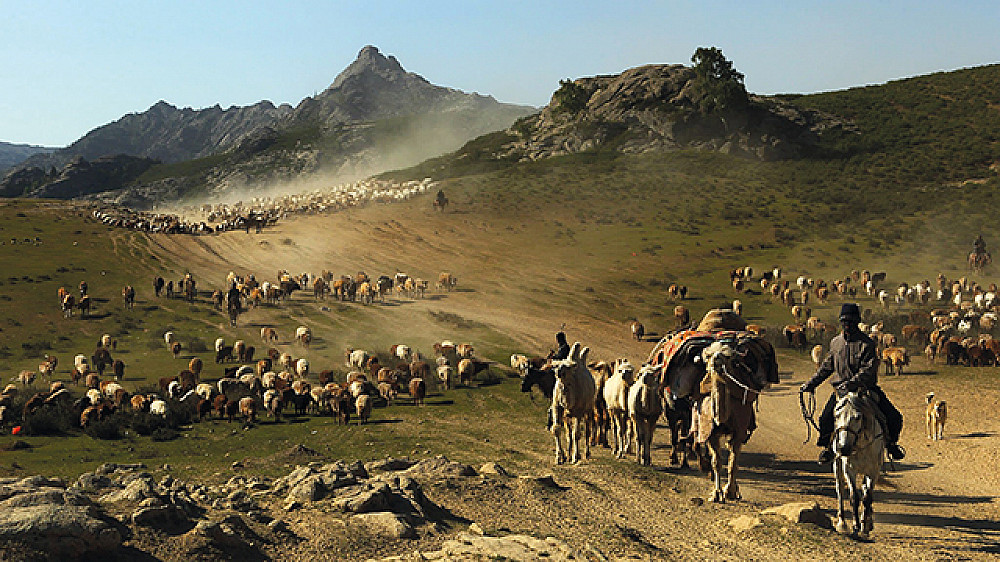 The vast attention paid to China’s Belt and Road Initiative misses the historical precedents on which it is based. Hearkening back to the nomadic understanding of geography of medieval times, the Chinese are following through on what the Mongols, and later Tamerlane, attempted: to unify the Eurasian landmass by establishing trade routes and encouraging commercial activities from the Mediterranean to the Pacific.

Nascent Chinese Eurasianism is slowly taking shape. It is a concept not so much of forceful engagement of Eurasian states by China, as some in the West view it, but rather an economic initiative that aims to gain access to the natural and financial resources of major Eurasian states by providing them with large sums for infrastructure projects.

The Chinese idea obviously requires control over major trade routes to and from Europe (a market of almost 500 million people).

Though invisible on geographic or political maps, trade corridors and control over them have been a major driving force in the development of Eurasia. Conquests and invasions were often motivated by the need to secure financial resources running through major trade routes in Central Asia and from the Red Sea and Persian Gulf to the Mediterranean.

Western powers have sought access to the huge Chinese market for centuries. Geography has largely precluded this, however, as the Chinese hinterland is closed off by the Himalayas, the Gobi Desert, and the Eurasian steppes. In ancient and medieval times, the only land route connecting the Chinese kingdoms to the outer world was through the modern Xinjiang province.

A further limiting factor was that the Chinese were never particularly eager to trade with foreigners (the country had most of what it needed and functioned primarily as an autarkic state). Chinese policies did not reflect any kind of Eurasian vision. The country’s rulers considered neighboring states tributaries, but knew little of far-flung Eurasian lands. No economic necessity propelled them to venture far away.

But today’s nascent Chinese Eurasianism can nevertheless be dated to back to medieval times. It parallels what other Asian powers tried to do centuries ago. Ironically, it was China’s gravest enemy, nomads, among them the Mongols,who had a clear vision of transcontinental trade between China and the Mediterranean world.

Living in the steppe lands of Eurasia, the Mongols saw the great potential of massive Eurasian trade and wanted to serve as a bridgehead between the Mediterranean and Chinese worlds.

Their expansion (the conquests of Central Asia, Iran, Syria, and the Russian steppes), often called chaotic, was in fact logical in light of their quest to control major trade routes emanating from the Middle East and Europe to South Asia and China.

For the Mongols, Central Asia was an economic hub from which trade routes emanated in many directions. The modern day Russian steppes were important as well, because it was possible to reach the Black Sea fairly quickly by horse, and trade with Eastern Europe.

Conquest was one approach. Another was to stimulate trade across these large swathes of land. The construction of roads, protection of caravans, provision of special financial rights to foreign merchants, and so on, were fundamental principles guiding the Mongols.

This concept of Asian “Eurasianism” existed after the Mongols too. Tamerlane, with his capital in Samarkand (modern-day Uzbekistan), invaded much of the Middle East, Caucasus, and north India. Before his death, he was intent on invading China and thereby connecting two economic powerhouses: China, with its human and natural resources, and the Mediterranean.

Conquests by the nomads centuries ago were dictated by economic need and facilitated by Eurasian geographic landscapes. The modern-day Belt and Road Initiative (BRI), or Chinese Eurasianism, like its predecessor, nomadic Eurasianism, involves the Central Asian, Russian steppe, and Indian-Pakistani geographic corridors. It also entails the construction of roads, their protection, and the overall stimulation of fair trade.

The modern vision of Chinese Eurasianism, therefore, based as it is on economic connectivity, fits into Asian geopolitical thinking of the past.

Previous contenders to connect the whole of Eurasia lacked the necessary resources. The Mongols and later Tamerlane’s state lacked powerful economies of their own: they were simply trading middlemen between China and the Mediterranean world. They also lacked human resources and technological expertise. As a result, the Mongols and other nomadic powers, though masters of half of Eurasia, largely depended on the more experienced Chinese, Iranians, and others to run their empires. This is why those pan-Eurasian concepts, though important milestones in human history, were short-lived.

Modern Chinese “Eurasianism” can be likened to past Asian prototypes, but it is inherently stronger and much more influential over the people of Central Asia, the Middle East, the Caucasus, and South Asia.

The Chinese have what the nomads lacked: a large population, technological prowess, economically productive centers, and strong instruments of soft power. The BRI is therefore likely to be more successful and thorough.

Moreover, unlike their Asian predecessors, who swiftly invaded large territories, the Chinese of today are very patient about their geopolitical goals. Any rush could bring about a coalition of forces that might preclude their initiatives.

Also, because the Chinese are working closely with states to protect Eurasian trade routes, it is unlikely that there will be a swift deterioration of security in any part of the BRI.

The BRI, which clearly outstrips all previous Asian global initiatives, reflects a nomadic understanding of Eurasian geography combined with a Chinese vision of the continent that surpasses military alliance models or closed security provisions among a group of states. The initiative projects Beijing’s notion of economic interconnectedness, interwoven with the centrality of China in Eurasia.

The article was primarily published by Georgia Today