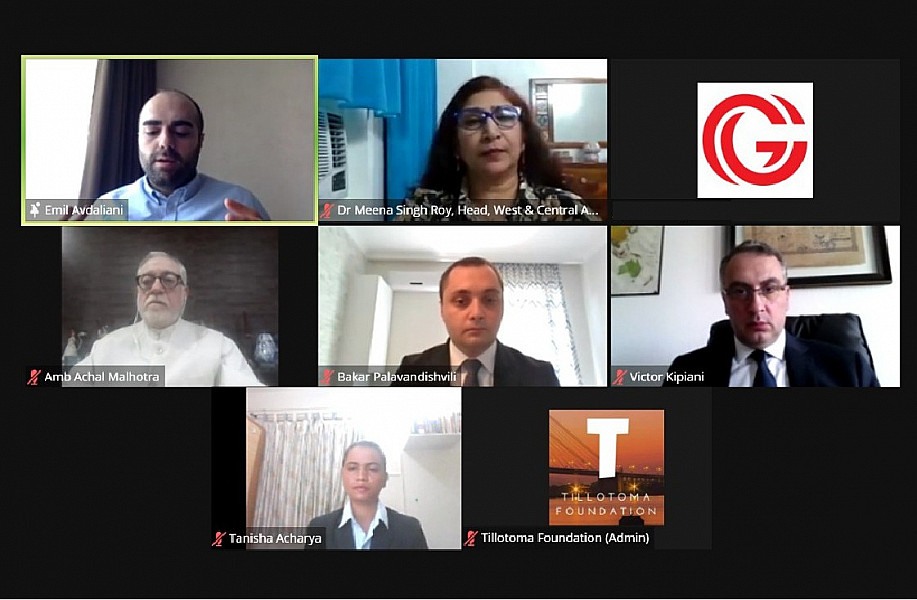 The main topics of the conclave included cultural, political, regional and economic aspects of the India-Georgia bilateral cooperation as well Indian policy issues in the South Caucasus.

Ms Tanisha Acharya opened the discussions with a welcome speech and highlighted the importance of the similar kind events for building up and bolstering partnership between the two countries.

Mr Victor Kipiani thanked the Tillotoma Foundation representatives for teaming up with Geocase for the joint event which, according to him, would contribute to boost good spirit cooperation between India and Georgia.

Victor Kipiani noted: “Georgia’s key geostrategic location at the juncture of Europe and Asia and its role in various transit corridors on one side, and on the other side, India’s global heft gross prospects definitely puts us in the position to expect more. With all the appreciations of the underwaters of Indian foreign policy, we acknowledge and are conscious of Russian-Indian connections but the regional implications obviously prompt Indian foreign policy and Georgian expectations to be more down-to-earth and more realistic. The conquest and the competition for the region picks up that should be considered geopolitically as well as business-wise in the region.”

Amb. Achal Kumar Malhotra touched upon the reasons of relatively low level of Georgia-India political relationship in the past and named Russia’s factor as the major obstruction however he noted that trade and economic relations were not affected by that fact and have progressed.

“I think the political part of the relationship may still move at a measured kind of pace but there is no bar on developing the economic and trade relationship between the two countries. Indian and Georgian governments, along with the private sectors have to work in tandem and explore the opportunities […] and measures which can be undertaken to generate a certain degree of confidence amongst the potential investors”- stated Amb. Malhotra during his speech.

He also mentioned: “I would recommend to the Government of India to raise the political level. And the least they can do immediately is to establish a resident diplomatic mission and embassy in Tbilisi or at least a consulate so that the relationship between the counselor and people-to-people contacts as well as trade and investments can be pursued more vigorously.”

Dr Emil Avdaliani talked about the regional context of India-Georgia political relationships and possible interests of India in the region.  He emphasized the areas where India could play a bigger role in light of the emerging multipolar world and considering the place of the South Caucasus in it. In this regard he highlighted aspects of possible cooperation: Economy – due to Georgia’s particularly beneficial geographical position as well as its active trade relations with the West, high-tech technologies, tourism, and military cooperation. He also stressed India’s potential role as a balancer among other active regional players.

“India is a relatively modest player in central Asia, the South Caucasus and in the Middle East however now there is the momentum for India to play a bigger role at least economically and perhaps geopolitically too.” – said Dr Avdaliani.

According to Dr Meena Singh Roy, in order to advance the India-Georgia partnership opportunities diplomatic relations should be taken to the next level by opening an Indian Embassy in Georgia, economic relations should also be intensified, Free Trade Agreement would have a special impact in this regard. “Agriculture, education, tourism, steel and power sectors in Georgia offer new areas we can further develop however tele-medicine, tele-education, connectivity and infrastructure development are the areas which need more focus to be shed upon,” – she noted. Dr Meena Singh Roy also underlined importance of the dialogue between Geocase and Tillotoma Foundation with the focus on doing some joint studies on energy, infrastructure, trade, or regional security. As she mentioned more interaction between the youth, cultural circle and private sector members also can be very beneficial to bolstering relations between the two countries.  “Georgia and India have realized the potential of each other and I think that it is the new momentum that we see today but there are greater opportunities in terms of expectations and what can be delivered by more practical and pragmatic approach”.

Baqar Palavandishvili concentrated on the bilateral trade relationship between Georgia and India and gave statistics on Georgia’s main trade partners. Figures of the year 2021 concerned the commodity goods Georgia exporting to its major trading partners and underlined that the 80 percent of the Georgia’s export was made to the countries with which it has a free trade agreement (EU, CIS countries, China, Hong Kong). He also spoke about Georgia-India economic relationship success story concerning Indian Tata Group which invested more than USD 700 million in Georgia’s hydroelectric power plant in Adjara region – Shuakhevi HPP which is one of the most important projects in hydro sector in Georgia since its independence. According to him, the investment and Tata Group participation in this project served as the benchmark for many international standards in terms of compensation elevations considering the circumstances of the most vulnerable groups in the region.

The webinar was finalized by the Q&A session. The organizations expressed willingness to continue cooperation and observe further opportunities for future mutual projects.

View the virtual even recording 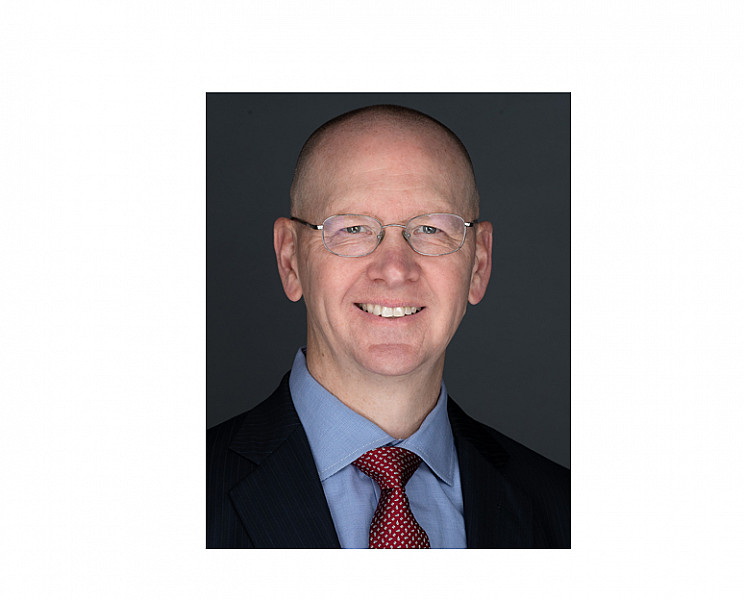 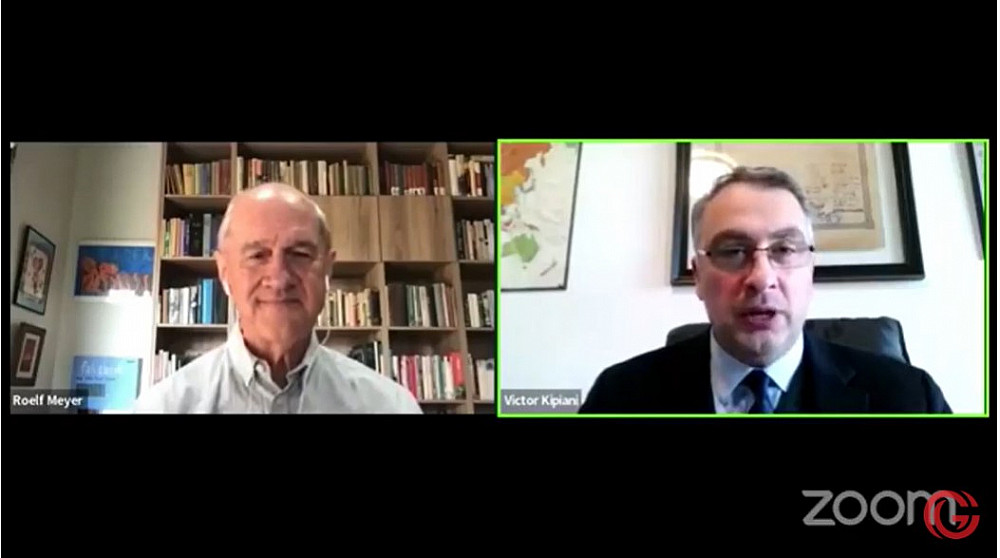 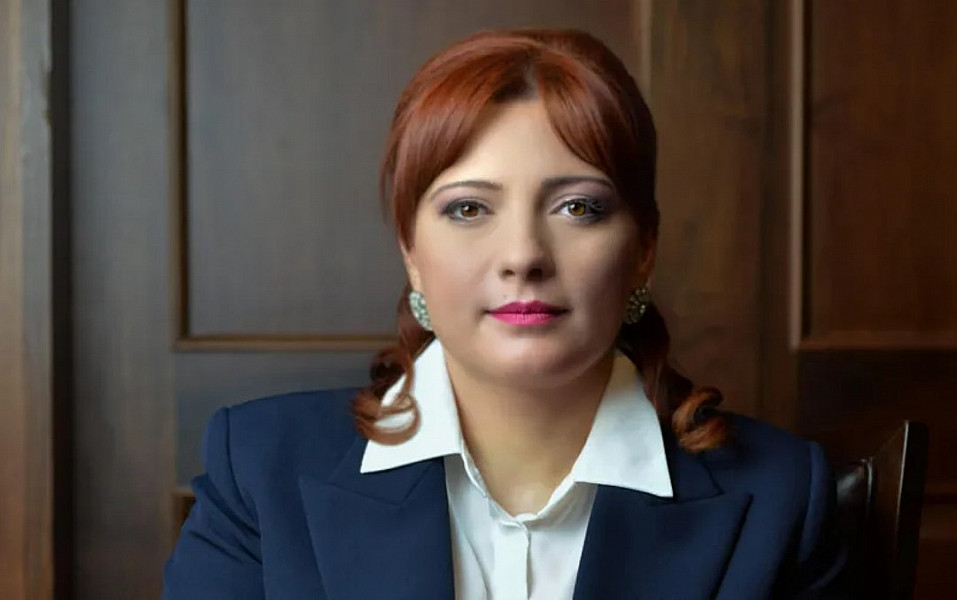